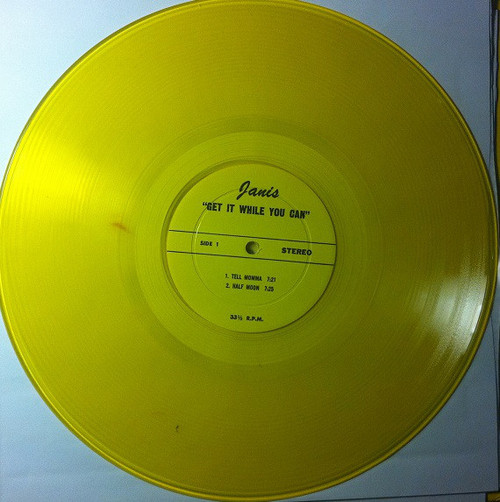 Rare original bootleg from 1973-74 when live shows were captured onto vinyl and unofficially released onto vinyl. Not often onto colored vinyl like this release, which has LEMON YELLOW VINYL.  The audio sounds like a soundboard recording with clear instrument separation and no audience chatter.  Three of the four sides look like new.  Side A has a few marks that don't skip or overly affect the first two tracks (each more than 7 minutes in duration).  Cover as pictured is near mint with minimum shelf wear and no holes/slices/splits.

Overall recording is clean with some occasional fading as expected with these unauthorized and not overly technical captures.  Colored vinyl from the '70s also yielded some intermittent static but overall this is a decent sounding live show that captures a feisty Janis telling security staff "leave me alone, I'll pay for any damage".  She also invites the audience to visit her in San Francisco at her "Pearl's Place" for a "good drink" that she serves "in dixie cups".

Great collectible for the Janis fan.

On the back cover, The Full Tilt Boogie Band is listed with its band members. The announcer at the start of concert announces them simply as "Miss Janis Joplin, and her Full Tilt Boogie!!!"
From both the lettering on cover & the printed labels, this appears to be a Rubber Dubber Records production, from around 1973, 1974 (when colored vinyl started appearing at stores).
Considering "the heat" that Mr. Rubber Dubber had at this point from the feds & record companies, I'm not surprised his usual "logo" is missing from this 2LP.