May I Have A Record Contract, Mick Taylor - Import LP w/Mint Vinyl 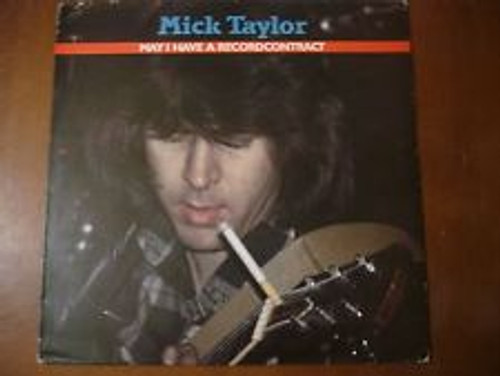 May I Have A Record Contract, Mick Taylor - Import LP w/Mint Vinyl

Rare 1984 Italian vinyl import LP on Kay Records label. Very clean vinyl and frame-ready LP cover. Nine-track compilation of live tracks and studio work that showcase Mick Taylor and testify why he's been ranked #37 among the top 100 guitarists of all time. Taylor, at the age of 16, substituted for Clapton (see note below) during a 1965 live performance of the Bluesbreakers. He eventually joined the band to replace Peter Green, who replaced Clapton when he left the Bluesbreakers for Cream. Tracks here are from gigs with John Mayall's Bluesbreakers (2), Rolling Stones (1970 rendition of Love in Vain, Hamburg, Germany), Alvin Lee (1981), Bob Dylan (1983), Alexis Kornery, and with the Jack Bruce band (1975). Taylor did eventually get a record contract; see our listings for Taylor's solo LPs :>)

In 1965, at age 16, Taylor went to see a John Mayall's Bluesbreakers performance at "The Hop" Community Centre, Welwyn Garden City.

It was after John Mayall had finished his first set without a guitarist that it became clear that for some reason Eric Clapton was not going to show up.

Taylor himself has said after seeing that Clapton hadn't appeared, but that his guitar had already been set up on the stage, he approached John Mayall during the interval to ask if he could play with them. Taylor mentioned that he'd heard their albums and knew some of the songs, and after a moment of deliberation, Mayall agreed. Taylor amended, "I wasn't thinking that this was a great opportunity... I just really wanted to get up on stage and play the guitar."

Taylor played the second set with Mayall's band, and after winning Mayall's respect, they exchanged phone numbers. This encounter proved to be pivotal in Taylor's career when Mayall began to look for a guitarist to fill Peter Green's vacancy the following year. Mayall contacted Taylor, and invited him to take Green's place. Taylor made his debut with the Bluesbreakers at the Manor House, an old blues club in north London. For those in the music scene the night was an event... "Let's go and see this 17-year-old kid try and replace Eric". Taylor toured and recorded the album Crusade with Mayall's Bluesbreakers. 1966 to 1969, Taylor developed a guitar style that is blues-based with Latin and Jazz influences. He is the guitarist on the Bluesbreaker albums Diary of a Band, Bare Wires and Blues from Laurel Canyon. He left John Mayall to join the Rolling Stones after Brian Jone's death. Later on in his career, he further developed his skills as a slide guitarist.

MERLE HAGGARD - Back to the Barrooms, Sealed Vinyl LP